(Chuck Muth) – Hope you didn’t think I’d blow off part five of my five-part “The Guinasso Files” just because we kicked Jason Guinasso’s (for the last time, that’s with an “o,” not a “hole”) arse on his anti-brothel initiative.

Now, I still owe you the 411 on Guinasshole’s…oops, I mean Guinasso’s…3905 Garlan Lane address – which will expose him as being a sneak as well as a creep.  But first, I can’t help but comment on an op-ed he inked this week that exposed him as the serpent-tongued weasel he is.

In his self-serving column published by the Nevada Independent, Guinasso says he’s “grown increasingly concerned about the political system in our country,” but claims it’s not “because a ballot question didn’t get the support I had hoped it would.”

That would be his anti-brothel Lyon County Question 1 that was crushed 80 percent to 20 percent on Election Day.

“My dismay,” Guinasso continued, “is because, in recent years (and especially this one), I am not so sure we have seen very much in the way of competing ideas.  They seem to have been replaced by competing efforts to instill fear, anger, and mistrust into targeted groups of people for the sake of creating ‘energy’ so people will ‘turn out’ to the ballot box and vote or so they will write checks.”

You know, like what Guinasso himself did with his anti-brothel initiative.

Like how he tried to instill fear in the electorate by falsely claiming underaged girls were working in Nevada’s legal brothels.

Or how he tried to instill anger among voters by falsely claiming women were being “trafficked” against their will in Nevada’s legal brothels.

“As for debate,” the creepy lawyer went on, presumably with a straight face, “that lost art has been replaced by ad hominem attacks on a person’s character or by the hateful disparagement of certain groups.” 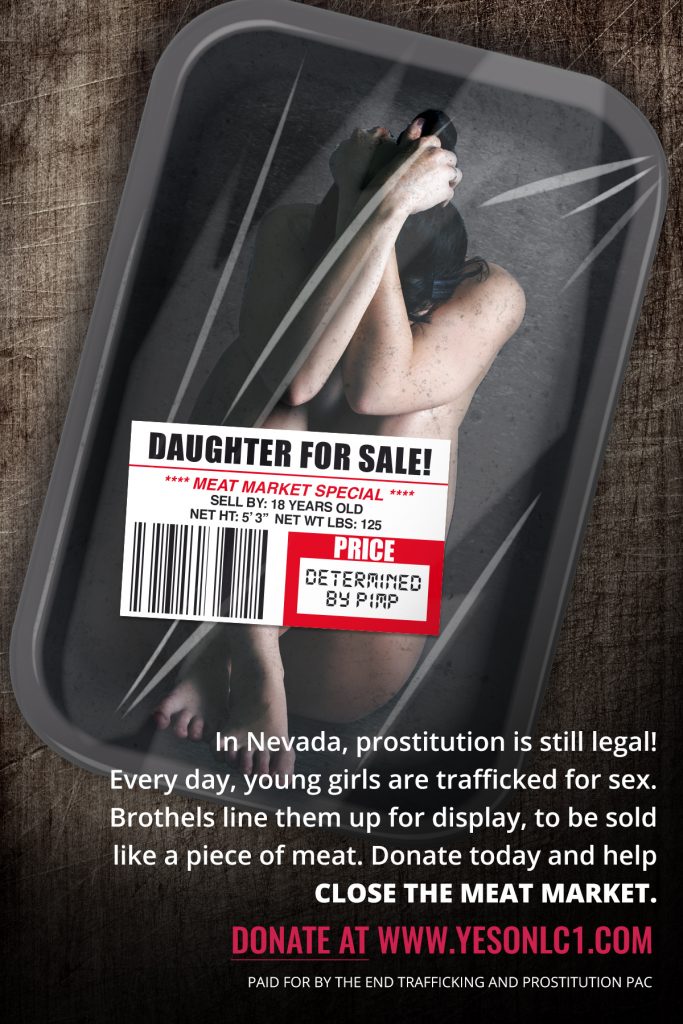 From Day One of Guinasso’s moral crusade against Nevada’s legal brothels, legal sex workers at Lyon County’s legal brothels challenged Guinasso and his accomplice – Melissa Holland of a Reno-based organization called “Awaken” – to debate the issue in public.

Instead, Guinasso and Holland routinely launched “ad hominem attacks” on the character of brothel workers, owners and the industry, including “hateful disparagement” of legal sex workers – especially in an ad displaying a young woman wrapped up like a piece of meat in a butcher shop!

Would it be an “ad hominem attack” to refer to these individuals as two-faced cowards?

Recall that 3905 Garlan Lane was Guinasso’s home address when Reno police went to investigate Guinasso’s 2003 Valentine’s Day assault on a 64-year-old senior citizen – who he head-butted, giving the man a bloody nose and mouth – in 2003.

3905 Garlan Lane was also Guinasso’s home address when Reno police responded to a domestic violence call after Jason and Kim – the “our sh*t don’t stink” couple who formed a PAC this year to ban Lyon County’s legal brothels – got into a physical altercation during what they described as “marital problems.”

And 3905 Garlan Lane is where Guinasso was living at the time he filed to run for Nevada State Assembly District 26 in March 2016.  But here’s the problem…

As Seth Richardson of the Reno Gazette-Journal reported in April 2016, “Nevada law states a candidate must live in their district for 30 days prior to filing.”

But that didn’t stop Guinasso.

When he filed for office, Guinasso listed 11210 Vincent Lane as his home address which, conveniently, was owned by his wife’s family’s trust and also conveniently located in District 26, not District 25.

According to Guinasso, who was sued for filing to run for an office in a district he didn’t live in, he was only temporarily living in his longtime 3905 Garlan Lane address while some remodeling work was being done on the Vincent Lane address – which he claimed he intended to move into later in the summer.

He also claimed Big Foot was real, that he owned a pet unicorn and that a leprechaun had stolen his Lucky Charms.

According to the RGJ, Guinasso “conceded his voter registration was at the Garlan street address for some time after he moved to Vincent Lane” – even though he never actually moved into the Vincent Lane house prior to filing to run for office.

Nevertheless, he claimed Vincent Lane was his official residence because he held “barbecues at the property,” kept belongings in a temporary storage shed on the property, maintained the landscape and went “to the property every day to…take care of his four dogs.”

Sounds like the dogs were the only ones actually living there!

Wait, wait.  The tangled web gets even more twisted.  Get this…

Guinasso claimed, for the purpose of running for office, that he lived on Vincent Lane while actually living on Garlan Lane.  But the house on Garlan Lane was also allegedly going through major renovations to get it ready for “a local nonprofit combatting sex trafficking” to move into.

That group – oh, so conveniently – was Melissa Holland’s “Awaken” organization.

The same Melissa Holland and Awaken that teamed up with Guinasso in the effort to put the anti-brothel initiative on the Lyon County ballot.

“Although we were disappointed that we could not move into the Garlan house given the time and investment we had committed to repairing the house,” Missy said in an affidavit, “we understood the unique situation confronting the Guinassos and agreed to delay moving into the Garlan house.”

So again, Guinasso was actually still living in the Garlan house in District 25 even though he filed to run in District 26 – which is a violation of Nevada state law.

Interestingly enough, Awaken isn’t showing the Garlan house as its HQ today even though the renovations are assumedly completed.  Indeed, according to its website, they’re located at 435 Spokane Street in Reno.

Apparently Guinasso sold the Garlan property that Awaken delayed moving into out from under them to someone else shortly after losing his election in 2016 – after a court unbelievably ruled he lived in the house he, himself, admitted he didn’t live in when he filed as a candidate.

I guess all men are, indeed, created equal…but some are created more equal than others.

The guy is as sneaky as he is creepy.

Keep all this in mind as he continues his moral crusade telling other people how to live their lives.