(Chuck Muth) – Ever notice how some people portray themselves as one thing in public, but are a completely different person in reality?  Like Bill Cosby – “America’s Dad” on television; a sexual predator in real life.

In addition, it often seems the people who are most vocal about a certain issue are the worst offenders.  Like “family values” politicians caught in the sack with a mistress.

So, since Reno lawyer Jason Guinasso (with an “o,” not a “hole”) – who has led the war against legal prostitution in Lyon County – has been snooping around looking into the backgrounds of brothel workers, I thought it only fair to check out Dudley Do-Right, as well, to see if he’s really the mild-mannered humanitarian with a “servant’s heart” he portrays himself as in public and in the media.

Turns out this is a guy suffering some deep emotional childhood scars with a violent, explosive temper and continued disdain for authority.  Get a load of this…

“I wasn’t a very pleasant kid to deal with,” Guinasso told Kristen Remington in a KTVN story in 2015.  “I was angry; I had a lot of issues.”

To start with, “Jason’s mom had seven kids; all with different fathers.”

Do ya think maybe this guy’s obsession with sex workers having multiple sex partners just maybe has something to do with him still having mommy issues about the same thing?

Now, according to the story, Guinasso and Stepfather #7 had some serious problems. “So Jason left home and joined a gang,” where he found guys “who were willing to fight with me and for me.”

After almost a year as a teenage gang-banger, Guinasso returned home with a “street-life perspective” and a willingness to fight his step-father.  And after one such violent dust-up, Guinasso says his mother “screamed at me” and said, “You’re not my son anymore!”

At which point Guinasso “then joined another, more violent gang” and later “was busted in possession of a sawed-off shotgun with intent to seek revenge on a bully” while attending Washoe High School. 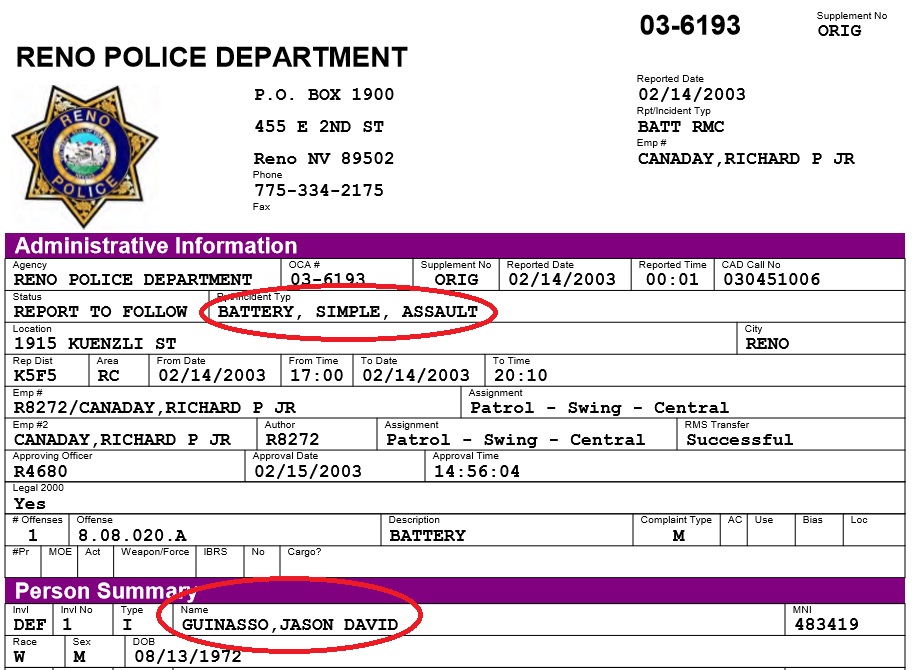 Guinasso eventually left the gang-banger life and became a lawyer – which some might suggest is just a less violent version of the same thing.

On February 14, 2003 – Valentine’s Day! – Reno Police Officers were dispatched to a Reno salvage yard to investigate a reported assault and battery.  The victim’s name was James V. Howard.  The assailant was Mr. Wonderful himself.

According to the police report (#03-6193), Guinasso confronted Howard “and started to yell at him” for allegedly calling his father-in-law, Bob Marsh, dishonest over some insurance issue about a fence on his property.

“Guinasso became irate,” the police report detailed. “Guinasso then grabbed him (Howard) and head-butted him knocking him to the ground.  He (Howard) obtained a bloody nose and lip from the head-butt.  He (Howard) states that Guinasso yelled something at him while he was on the ground and then left with Marsh.”

A witness to the attack, Darrell Wallberg, told police officers “that after Guinasso head-butted Howard, he stood over the top of him and yelled that if he ever tried to call Marsh of himself a liar again he would ‘beat the shit out of him again.’”

Guinasso was cited for “Battery.”

Oh, and for future reference, Guinasso’s listed address on the police report was 3905 Garlan Lane.  You’ll see why this matters in Part IV of “The Guinasso Files.”