(Chuck Muth) – Jason Guinasso is an anti-brothel religious zealot with a “Pretty Woman” complex and an explosive temper.  He’s also a slimy lawyer, making if extremely difficult to find any redeeming qualities in the man whatsoever.

Now, the “slimy lawyer” thing isn’t just my opinion.  Here’s what Vicki Campbell-Smack wrote about him on Facebook not too long ago – and confirmed to me in a personal conversation a week ago…

“Jason is the lowest of the lowest type of lawyer.  He represents workman’s comp insurance companies.  When I was injured at work, he made my life a living hell, as well as for others.”

So there seems to be a consensus.  Onward…

OK, for those just joining us, Guinasso (and for the record, the correct spelling is to end the name with an “o,” not “hole”) is also the sanctimonious busy-little-beaver behind Lyon County Question 1 – a ballot initiative seeking to shut down the county’s four legal brothels and force the working girls there back on the street.

This, we’re to believe, in order to “save” them.

The guy appears to fancy himself a modern-day Richard Gere from the movie “Pretty Woman” – where Gere “saved” Julia Roberts from life as a prostitute – but without the good looks or charming personality.

In fact, with his explosive temper and violent tendencies – which I’ll detail later – Guinasso actually more resembles the character in the movie played by Jason Alexander, who “beat the sh*t” (more on this phrase later) out of Roberts in one scene.

The truth is – which I was just able to confirm this week – Guinasso’s real motivation for trying to close the legal brothels is anything but humanitarian.  Indeed, he’s not trying to “save” women.  Instead, he’s been using them as pawns in a political vendetta against the late Dennis Hof, owner of the four Lyon County brothels.

Here’s are the facts…

In November 2017, Hof announced officially that he was running against then-Assemblyman James Oscarson in the 2018 Republican primary.

And Guinasso – after getting creamed in his own controversial (more on this later, as well) GOP assembly primary in Washoe County in 2016 – is now working for Hutchison’s law firm.

In other words, a giant fishing expedition.

Now, unless he was planning on stalking these women or soliciting them, what other motivation could this creepy lawyer have for asking for the names and home addresses of sex workers other than to potentially do political harm to Hof’s campaign against his boss’ buddy?

Four months later, and armed with whatever information he obtained from the brothel work cards, Guinasso and his wife (more on her later, too) formed a Political Action Committee (PAC) called “Ending Trafficking and Prostitution” (ETAP).

ETAP then proceeded to launch signature-gathering efforts to place a question on the ballot to end legal brothels in Lyon and Nye counties.

And get this: Lyon and Nye just happened to be the two counties where Hof’s six legal brothels were located. What a coincidence!

Of course, Guinasso didn’t want people to see his true motivation as a political assassin.  So he teamed up with a self-righteous Reno woman named Melissa Holland, who purports to run a prostitute rescue foundation called “Awaken.” 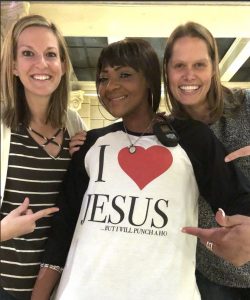 Holland is on far right

And together the pair launched a highly offensive and dishonest propaganda campaign to aid their signature-gathering operation which they called “No Little Girl” – as in, no little girl dreams of growing up to be a prostitute.

I’m guessing no little girl dreams of growing up to be a clerk at the DMV either, but whatever.

Now, lest you think Holland, too, is trying to “save” prostitutes rather than harboring disdain for them, here’s a photo of her and two other women with the woman in the middle wearing a t-shirt that reads: “I (Heart) Jesus…But I Will Punch a Ho!”

Holland is smiling like the Cheshire cat and pointing to the front of the t-shirt.

Apparently in this hypocrite’s world violence against women is a bad thing…unless the woman is a sex worker.  In which case go ahead and, as Guinasso himself might say, “beat the sh*t” out of her.

But I’ll get into THAT in Part III of The Guinasso Files.  Stay tuned, Batfans…